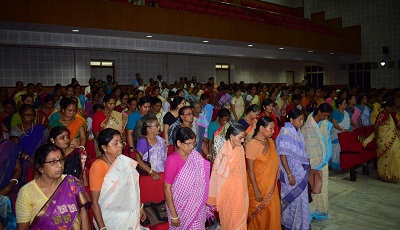 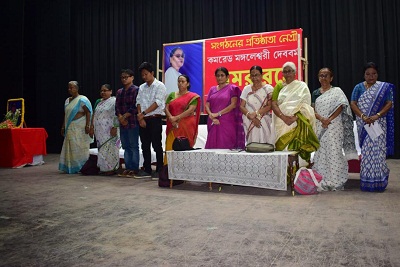 The All India Democratic Women’s Association (AIDWA) held a condolence meeting in the Muktdhara Auditorium on June 13 in Agartala to pay homage to the memory of Mangaleshwari Debbarma who passed away on June 5, 2019 at the age of 93. More than 250 women leaders from all the 22 sub-divisions and 8 districts attended this meeting.
Mariam Dhawale, AIDWA general secretary gave inspiring accounts of the tremendous sacrifices made by Mangaleshwari to take forward the struggle for emancipation of women.
The condolence meeting which was presided by AIDWA state president Romoni Deb Barman was also addressed by AIDWA vice-president Rama Das, AIDWA state secretary Jharna Das Baidya, AIDWA vice president Krishna Rakshit, Panchali Bhattacharya and Anurag Debbarma, Mangaleshwari’s grandson.
Mangaleshwari was the former AIDWA Tripura state president. She also was the vice chairperson of the State Women’s Commission for some time. Mangaleshwari was one of the founding leaders of the Ganatantrik Nari Samity which was later renamed Tripura State Democratic Women’s Association. She was a beloved tribal leader and freedom fighter.
The Ganatantrik Nari Samity actively organised poor tribal women farmers of Tripura against the oppression of the feudal lords. When the Maharaja tried to collect a major portion of farm produce as tax, women along with the men in their families participated in the struggle in large numbers and fought with weapons and with chilli powder against the harassment of the king and his henchmen.
Mangaleshwari’s burning desire to study led to the starting of the first school in her village, Rajghat. Challenging the feudal-patriarchal norms, 11 year old Mangaleshwari created history when she became its first school mistress on a salary of Rs 10 a month. She continued studying as well as teaching other children.
The Upajati Ganamukti Parishad (GMP) launched its Mass Education Movement in 1945. Mangaleshwari was inspired by this movement and joined this campaign. She worked actively to promote education among the tribal communities. Com Dasarath Dev, a legendary leader of the Left movement visited Rajghat during the Mass Education Movement of the GMP. Seven years later, she married him in 1952 while they were underground during the tribal revolt against feudal lords. Com Dasarath Dev was elected as the Member of Parliament in 1952 and was later also the Chief Minister of Tripura.
Women who participated in this meeting pledged to defeat the nefarious designs of the BJP and keep the flag of AIDWA flying high. The terror tactics of the BJP shall not succeed. Mangaleshwari will always remain a source of inspiration for the democratic, progressive women’s movement in its struggle against injustice and for equal rights for women.