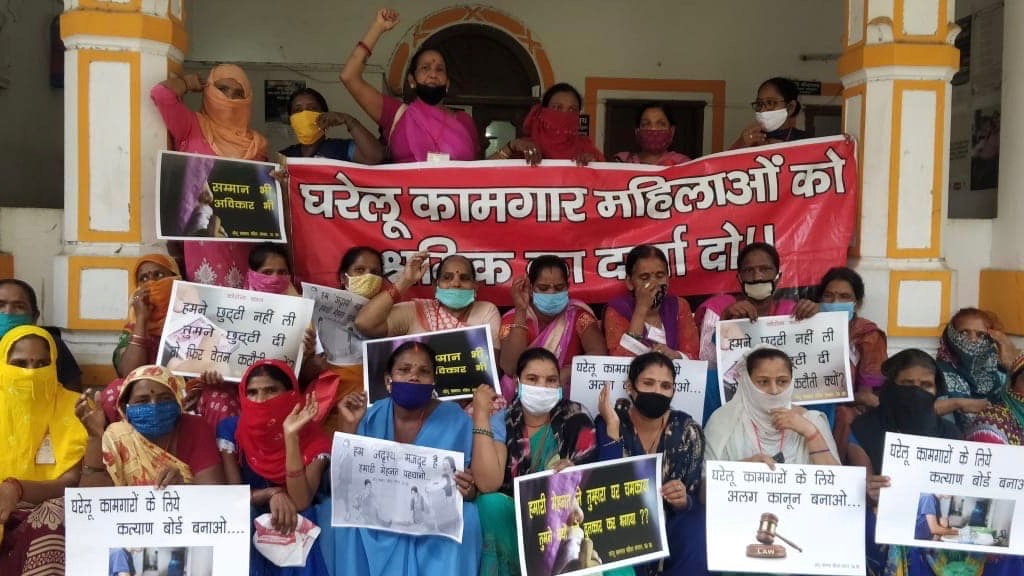 Domestic workers organized with the All India Democratic Women's Association in Lucknow, UP at a protest to demand recognition as workers as well as emergency financial aid.

In India, the labor of millions of women domestic workers is not recognized, depriving them of labor rights, formal terms of employment, and respect.

Bengaluru has an estimated 400,000 domestic workers. They constitute a large proportion of the city’s workforce, and yet they still lack fundamental rights, a fact that has become even more apparent since the start of the pandemic.

Kajita (28) and Noor (45) are migrant workers from West Bengal. Living 2,000 kilometers away from home, they dwell in a slum in east Bengaluru’s Thubarahalli area—hidden by the rising apartments in an upscale locality that connects the two major IT centres, Marathahalli and Whitefield.

India’s migrant workers, who move from rural to urban areas in search of gainful employment, take a big share of the burden of household income onto their shoulders—most of them send a major part of their income to their families in the villages for their sustenance. They live in cramped shanties of tarpaulins and tins in a sprawling city of soaring expenses and expanse.

Before the countrywide lockdown was announced in March 2020, Kajita would start her day at 4:45 a.m. and return home after 9 p.m. She would work for more than 15 hours a day in 10 households. Noor would go to work at 5:45 a.m. and return around 6:30 p.m. She used to work in four households—eight hours in one household and then dividing the rest of her time working in other houses. Their work includes but is not limited to sweeping, cleaning, cooking, washing dishes and clothes, and child and elderly care.

While they take the heavy burden of physical work, their work is far from being recognized. The household chores have been historically seen as tasks that women are supposed to perform without asking for any remuneration. The United Nations highlighted the lack of public acceptance to consider a household as a place of work—resulting in non-recognition of women’s labour at a household as work. The UN also points out that India lacks comprehensive national legislation that would guarantee formal terms of employment, including minimum wage and decent working conditions, to the domestic workers. They are often left at the mercy of their employers without having access to any social and economic benefits from the state. Speaking up about their day-to-day exploitations often could mean threats, intimidation and violence. Weekly days off, time off for holidays, or annual paid leave is a privilege most domestic workers are deprived of.

Kajita and Noor’s income was just about enough to support themselves and their families before the announcement of a lockdown in India. While a younger worker like Kajita might take up work in about a dozen houses to supplement her income, older workers like Noor typically take up an 8-hour or 12-hour job with one household and try to earn a major part of their income from there. The income they earned throughout a decade of work as domestic workers was neither sufficient to uplift their standard of living nor could it ensure them a “healthy and safe stay at home” during the pandemic.

Once the lockdown began in India, Kajita and Noor and the other domestic workers found themselves without work for more than four months. One of Kajita’s employers paid her the first two months of the salary during the initial phase of the lockdown, while the others refused to pay her during the lockdown. She lost around 90 per cent of her monthly income for several months. Noor was paid half the amount of her salary for the first two months of the lockdown. Kajita now earns Rs 7,000 ($96) per month—a sharp decline in her income by more than 70 per cent from Rs 30,000 ($413) a month that she earned before the lockdown; and Noor earns Rs 11,500 ($158)—her salary declined by almost 50 per cent from Rs 20,000 ($275) a month.

The household expenditure, however, did not fall with the falling income. It, in fact, increased compared to the proportion of income. Kajita and Noor each had to pay Rs 2,500 ($34) as the rent for their shanties and electricity bills even during the lockdown. They still had to buy a 20-liter can of drinking water for Rs 25 ($0.34)—in the absence of access to clean drinking water in the slum area where they live—along with other essential items.

Noor told me in October 2020, “What we received [as a food kit from some organizations such as the Centre of Indian Trade Unions and Bharat Gyan Vigyan Samiti] for one month, we survived on [it] for more than two months. Since the lockdown, our life has changed. We have no income, but we continued to spend.” Kajita said, “We [Kajita’s younger brother and sister] shared one meal three times a day. We have never seen [this kind of misery] earlier.”

S. Selvi, the general secretary of a domestic workers’ union in Bengaluru—affiliated with the Centre of Indian Trade Unions (CITU)—began her journey of working with domestic workers in 2012. In her experience, the most common threats of violence surface when a domestic worker asks for a hike in wage—or refuses to perform tasks other than the ones agreed in verbal negotiations at the time of joining—or when a worker resists sexual abuse by the male employer.

Intimidated by the threat that an employer could file a theft report with the police against them (even if they are innocent), most domestic workers tend to suppress their voice. They fear job loss; they fear actions on them or their families by employers. Therefore, in most cases, they avoid registering any complaint.

Selvi told me about the case of Meena who was employed by a man in north Bengaluru. She said, “The employer used to torture and sexually assault her. When she opposed, the employer beat her. Her body was marked with burnt wounds of cigarette butt stubbing. He used to torture her so much so that she had to be finally hospitalized.”

“In another case, in north Bengaluru,” she told me, “the employers filed a police complaint against a worker, Nilam, alleging theft. She was innocent. The complaint was an insult for her; she could not take the blame, and attempted suicide”.With the intervention of the union, both Meena and Nilam were rescued. Selvi emphasized, “In [these] situations, organizations [like] All India Democratic Women’s Association (AIDWA) play an important role in giving confidence to the victim and motivating her to register a complaint.”

The continual battle by unions and organizations to safeguard the rights and lives of domestic workers has pushed the Central Government to at least introduce the Domestic Workers (Regulation of Work and Social Security) Bill, 2017. The formation of a “national policy” for safeguarding the interest of domestic workers has been pending for several years. However, the challenges in their lives are not pending—they do not vanish, with or without a pandemic.

[This is a slightly edited form of an article by her produced by Globetrotter.]