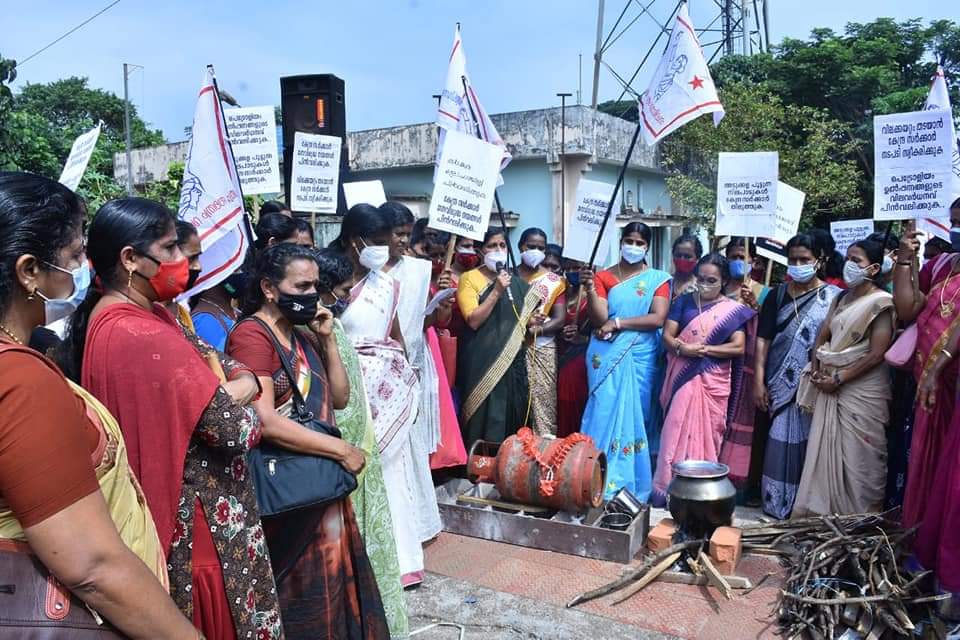 Thousands of women all over the country responded to the call by the All India Democratic Women’s Association (AIDWA) and came out on the roads on November 16, 2021, in protest against the uncontrolled price hikes, and condemned the failure of the BJP-RSS regime in providing relief to crores of the poor. Women organised spirited rallies, demonstrations and dharnas in Kerala, West Bengal, Tripura, Tamilnadu, Telangana, Andhra Pradesh, Karnataka, Maharashtra, Gujarat, Rajasthan, Assam, Bihar, Jharkhand, Odisha, Delhi, Haryana, Punjab, Uttar Pradesh, Madhya Pradesh and Himachal Pradesh.

The largest actions took place in Kerala, where 18,958 women held large demonstrations in 836 towns and villages in all 14 districts. In Tamilnadu, over 5000 women held actions at 205 centres in 24 districts. Funeral processions of gas cylinders by women attracted public and media attention in Tamilnadu. Over 2000 women came out on the streets in all 16 districts of West Bengal. A militant protest action was held in Kolkata by women, bravely facing all attempts by the police to create obstacles, and they burnt the effigy of Prime Minister Modi. Undaunted by police repression and attacks by BJP-RSS goons in Tripura, more than 1000 women marched in Agartala. Figures from many other states are awaited.

Women took out processions beating thalis with rolling pins to show that their plates are empty, carried empty gas cylinders on their heads, burnt effigies, cooked on firewood before collectors’ offices, and also distributed snacks and laddoos made of mud. Memoranda were submitted to the district collectors and tehsildars in most of the states. Women held door-to-door campaigns, street corner meetings and distributed thousands of leaflets in each state.

The rapid increase in prices of petrol, diesel, cooking gas and all essential commodities has caused extreme distress amongst all sections of the people, except the rich. The working class, especially unorganized workers with a large women’s component, the peasantry and agricultural workers are of course the worst hit.

The reality of the lives of the daily wagers and unorganized, informal sector women is totally invisible to the ruling regime. Their purses are empty as there is no decent work available. Their pain and suffering cannot be described in words. Women are doing multiple jobs, doing whatever kind of work they are getting, just so that the family can keep alive. But is this actually keeping alive, without basic needs for a decent human existence! The desperation of women goes unnoticed.

Women say that they cannot bear to see their starving children crying for food. “Many a times, we force them to drink water and go to sleep quietly” lamented the mothers. Some of the Adivasi women said that they have stopped using oil and cook food in water now. Meena said that they eat only once a day and use one kilo of potatoes for one week. Meena’s family consists of eight members. Women sit near the temples and collect the left-over oil from the lamps lit by devotees in small vessels for their houses. Just as it was heart-rending to see the images of thousands of dead bodies floating in the Ganga, it was unbearable to watch extremely poor women collecting drops of oil from the 12 lakh lamps lit in Ayodhya, because the price of mustard oil has crossed Rs 200 per litre.

A Pew Research report in March this year showed that a third of even the Indian middle class lost incomes when the first Covid wave hit India in mid-2020. A middle class is defined as someone with an income roughly between Rs 22,200 and Rs 44,400 a month.

“Middle class in India is estimated to have shrunk by 32 million in 2020 as a consequence of the downturn, compared with the number it may have reached absent the pandemic. This accounts for 60 per cent of the global retreat in the number of people in the middle-income tier,” the report said. India led with the most number of people (75 million) falling into poverty in the economic devastation after the first Covid wave. The situation will only be a lot worse after the second wave but no estimate is available yet.

Pooja, a retired teacher said, “I have stopped making a monthly budget because that adds to the stress. But a weekly budget is also hard to manage”. The spike in prices of oil and pulses had made the kitchen budget go awry. People have no choice but to dip into their savings to make ends meet. A self-employed worker, Manisha said that she is now forced to use palm oil (Rs 120 per litre) as the cost of refined sunflower oil that she used daily has now jumped to over Rs 180 per litre. She is now also using lower grade quality of tur dal. “We are unable to buy ration in bulk for a month anymore. We only buy in small quantities for daily use and avoid using expensive vegetables (tomatoes are Rs 80 per kilo) as much as we can.", said Manisha. Considering children’s education and medical expenses, and left with no other option, Gauri’s husband has cancelled his life insurance policy and withdrawn the amount to supplement expenses. Most households have started cutting down expenses or changing their food habits to cope with the price spiral. If this is the situation of the middle class, which can dip into whatever little savings are left, we can imagine what will be the story of the working classes who have nothing to fall back upon!

The 2021 Global Hunger Report released recently has once again highlighted the deplorable conditions of food insecurity and nutrition in India. The country has slipped from 94 out of 107 to 101 out of 116 on the World Hunger Index in 2021, even below Pakistan, Nepal and Bangladesh. The FAO Report on Food Security in July showed that the persons facing moderate to severe food insecurity in India increased from 43 crore in 2019 to 52 crore in 2020. India, with the largest public stocks of food grains, also has the largest number of hungry and food insecure people in the world.

The targeted public distribution system under the National Food Security Act (NFSA) covers only 67 per cent of the population as per the last 2011 census. It excludes a large section of the poor who should have been beneficiaries. Lakhs of ration cards have been cancelled during the pandemic. Additional names of family members are not being included in the existing ration cards. The biometric system further excludes all those whose finger prints are not recognized by the machine. Direct cash transfers instead of food grains or oil in some states has made it difficult for women to buy these essential items in the open market. Quantity of the PDS food grains has been reduced. Distribution of kerosene and dals have been totally stopped in most places. Atta (wheat flour) of bad quality is given instead of wheat in some places.

All those who lost their livelihoods were left stranded without access to even the PDS and they did not have money to buy the grains. Daily wagers cannot avail of their rations due to the inconvenient shops timings. They cannot afford to lose a day’s work. Thousands of migrant labour do not have ration cards. Closure and irregular functioning of the schools and anganwadis during the pandemic has led to denial of basic nutrition to children and pregnant and lactating women. Despite repeated demands by AIDWA, no mechanism was set up by the administration to address this issue. There is no guarantee that the dry rations were actually reaching the beneficiaries during the lockdown.

It is shocking that the Modi government is unable to see the acute hunger crisis growing in the country and is in total denial of this humanitarian crisis. Women have decided to take forward the struggle against price rise militantly in the coming days. AIDWA has resolved to reach out to lakhs of women from all sections and mobilise them against the thoroughly insensitive, anti-people and pro-corporate Modi government.