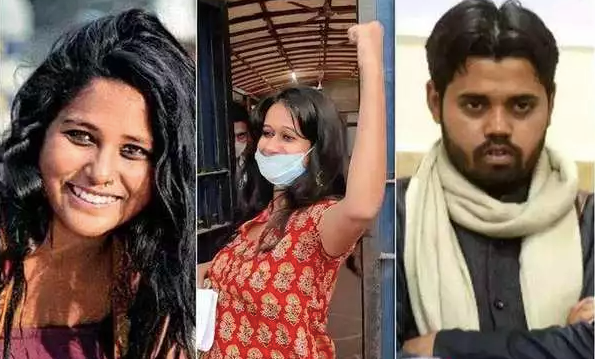 Last month saw the emergence of a silver lining amidst the dark clouds hanging over our country for the last seven years. Three young students Natasha Narwal, Devangana Kalita and Asif Iqbal Tanha were released on bail on June 15 through a historic order by the Delhi High Court. They had been incarcerated in the Tihar Jail in Delhi for over a year under the draconian UAPA on the totally false charge of having incited the Delhi communal riots last year.

Their real ‘crime’ was that they had participated in the anti-CAA protests in Delhi and had supported the unprecedented Shaheen Bagh struggle by thousands of women. Many other students like them are still in jail, while those BJP leaders who actually incited the Delhi riots, like Anurag Thakur and Kapil Mishra, roam scot free.

Among the many memorable passages in the Delhi High Court judgment delivered by Justices Siddharth Mridul and Anup Bhambhani, are: “It appears that in its anxiety to suppress dissent and in the morbid fear that matters may get out of hand, the state has blurred the line between the ‘right to protest’ and ‘terrorist activity’. If such blurring gains traction democracy would be in peril…Protests against governmental and parliamentary actions are legitimate; and…it is not uncommon for protesters to push the limits permissible in law…Considering, however, that the right to protest is a fundamental right that flows from the constitutionally guaranteed right to assemble peaceably and without arms enshrined in Article 19 (1)(b) of our Constitution, surely the right to protest is not outlawed and cannot be termed as a ‘terrorist act’ within the meaning of the UAPA.”

There was a wave of joy and relief across the country at the Delhi High Court judgment. Natasha’s father Dr Mahavir Narwal, a prominent Left activist of the People’s Science Movement, died of Covid in May and she was not given bail in time to even see her father alive for the last time. She went back to Tihar Jail after her three month parole was over on May 31.

The Delhi Police, which is directly under Union Home Minister Amit Shah, appealed against this judgment to the Supreme Court. While the Supreme Court declined to cancel the bail of the three students who had been set free, it nevertheless ruled that the Delhi High Court judgment would not be treated as a precedent when dealing with UAPA cases.

Hundreds more are languishing in jails in the last few years of the Modi regime in trumped up cases under the Unlawful Activities Prevention Act (UAPA), National Security Act (NSA) and the archaic Sedition Act of British colonial vintage. They include 16 women and men who are called the Bhima Koregaon detenus. Many of them - intellectuals and human rights activists who have been fighting consistently for the poor - are in jail for over three years.

Then there are several journalists, cartoonists and film makers who have been thrown into prison simply because they have been critical of the Modi-Shah-Yogi regime. One young woman film maker Aisha Sultana was recently booked under the Sedition Act for tweeting against the Lakshadweep administrator. Luckily, she was given anticipatory bail by the Kerala High Court.

June 26 this year was the 46th anniversary of the imposition of the Emergency by the then Congress government. Today what the country is facing is an undeclared Emergency under the BJP government. That day also marked the completion of seven months of the historic farmers’ struggle in our country. The Samyukta Kisan Morcha (SKM) under whose banner that struggle goes on gave a nationwide call that day to ‘Save Agriculture, Save Democracy’. The Central Trade Unions actively supported that call. So did AIDWA together with SFI and DYFI.

The struggle for democracy, sovereignty, secularism, federalism, economic, social and gender justice – values enshrined in our Constitution – are under attack as never before from the current central government. Let us defend these values with all our might! Let us strengthen the struggle to dispel the dark clouds and breathe under the open sky!