Cubans recognize the enemy: Understanding the protests in Cuba 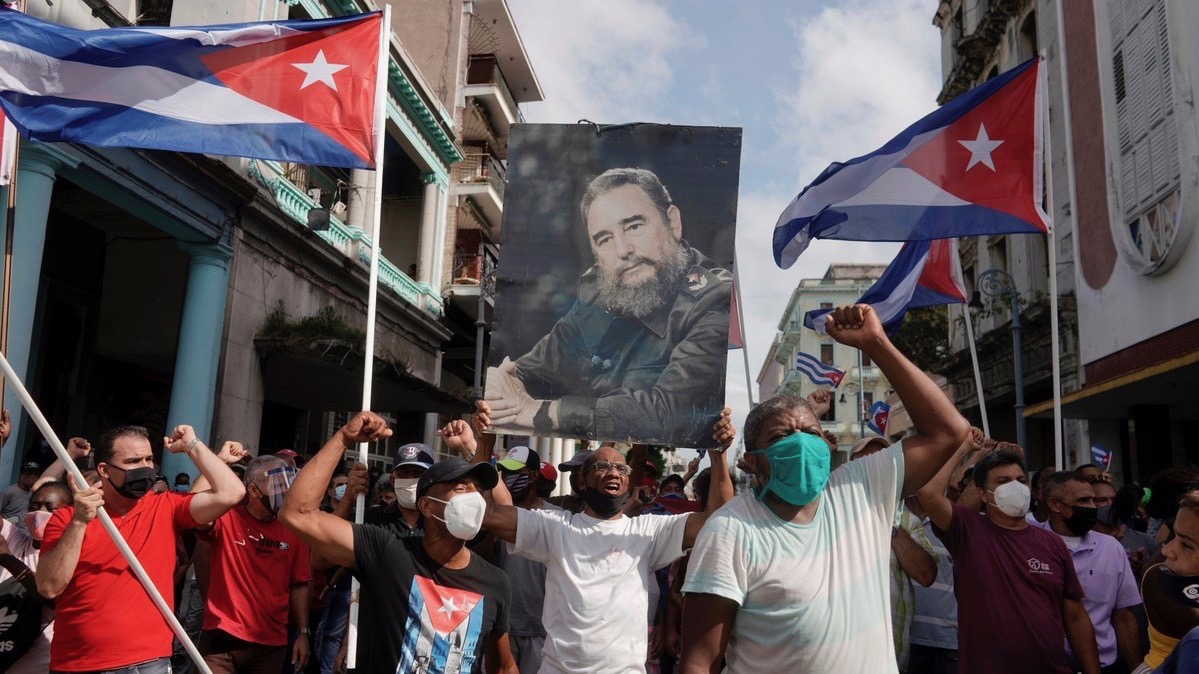 Cubans demonstrate to defend the socialist government and the revolution.

On July 11, protests broke out in different parts of Cuba. The people came out on the streets demanding answers for legitimate problems — insufficient access to food and medicines, frequent electricity outages, etc. The pandemic is a major factor fuelling this social crisis. The main culprit, however, is the crippling economic blockade imposed by the US which restricts sharply the Cuban government’s power to purchase the basic necessities that the protestors were demanding.

However, when the Western media reported these protests, it blamed the unrest on people’s discontent against the country’s socialist government. The narrative being created by the US government and President Joe Biden was that the demonstrations took place because the people of Cuba want to overthrow the government. While Biden proclaimed that he stands with the people of Cuba, not once did he talk about the 243 unilateral sanctions that have been imposed on the island nation by the US, and the impact they have had on the lives of the people.

What are these sanctions and what do they mean for Cubans?

The US- imposed embargo on Cuba is now 60 years old. It has cost Cuba $147.8 billion over these years. If this blockade was to be removed, it would allow Cuba to provide much-needed essential goods to its people.

The policy behind imposing this crippling blockade dates back to 1960, when US State Department’s Lester Mallory wrote a memorandum on Cuba saying most “Cubans support [Fidel] Castro” and there is “no effective political opposition. … The only foreseeable means of alienating internal support is through disenchantment and disaffection based on economic dissatisfaction and hardship.”

Even today, the US continues the blockade for the same reasons — to create a situation of desperation among the people which could lead to the overthrow of the socialist government and the Cuban revolution.

The blockade was tightened further under former president Donald Trump’s policy of maximum pressure. The coercive measures brought in by Trump restrict not just the trade between US and Cuba, but also do not allow Cuba to trade with other countries. Johana Tablada from the Cuban Foreign Ministry says, there are 63 oil companies that do not sell to Cuba as they do not want to challenge the US embargo.

This blockade also restricts how much money Cuban Americans can send as remittances back home. Because of the trade embargo, Cuba is largely dependent on tourism- related activities for income. The pandemic has meant this income also has been stifled. In this situation, the remittances have been an important source of sustenance for Cuban families.

These Trump-era measures have continued in Biden’s term. In his 8 months as president, Biden has not made any move to ease any of these restrictions on Cuba. Despite stating his intention of normalizing relations with Cuba during his campaign, Biden has failed to address entirely what these sanctions mean for a country already suffering due to the pandemic.

The blockade on Cuba hits women the hardest

A recent Oxfam report shows that women in Cuba carry the heaviest burden of sustaining daily life and meeting the needs of their families. The material shortages caused by the US embargo directly impact their ability of being able to do so, thereby increasing stress and reducing the quality of their lives.

It also impacts women in the public sphere as many sectors where women constitute a significant part of the workforce are hit hard by the sanctions. For instance healthcare (around 71% of Cuba’s medical professionals are women) and education (in 2019, women made up over 60% of education workers).

The Cuban health force responding to the COVID crisis also consists of a majority of women. Cuba’s remarkable response to the pandemic amid the shortages arising from the sanctions is a testament to the efforts of these health workers.

The small protests on July 11 against the social and economic problems being faced by the people were portrayed by Washington and its media as Cubans desiring change — change of government, change in the revolutionary process. But the Cuban people understand well these tactics of the US and Western media. Shortly after the limited demonstrations (which were reported as ranging from hundreds to thousands of people depending on which corporate media outlet you get your news from), tens of thousands of Cubans took to the streets in defense of the revolution.

The shortages in food have meant people have to stand in long lines and their diet has been limited, but there have been no famines. In response to the shortages in medicines, Cuba has taken to manufacturing much of the supplies it needs. In addition to sending its doctors as part of medical brigades to countries across the world to help respond to the pandemic, Cuba has also developed five vaccine candidates, two of which have already shown remarkable efficacy in trials.

It is this revolutionary process that Cubans were defending when the Western media attempted to create a picture of discontent that does not actually exist. On July 12, Biden issued a statement saying, “We stand with the Cuban people and their clarion call for freedom.” This statement did not fool the people of Cuba who knew that if indeed Biden stood with them, he would remove the 243 coercive measures that the US government has imposed against Cuba.

These measures are not considered criminal by just Cubans, but by most countries of the world. On June 23, 184 countries in the UN General Assembly voted to end the US blockade on Cuba. Only the US and Israel voted against the resolution.

“Even if Biden does nothing, we will still pull through,” said Johana Tablada. “It may cost us a bit more, but we have a plan, we have a strong social consensus. None of these plans include giving up socialism. The ordinary Cuban—all of us—is capable of sacrificing our individual interests because we know that it is essential for us to have a sovereign homeland [that is]free [and] independent, and that might be as far as we go.”

Imperialism
US sanctions on Cuba
Cuba