Opportunity for Livelihood to Financial Abyss: Reality check on MFIs

(Report of Workshop on Women’s Indebtedness Conducted Recently by AIDWA in Bhubaneswar, Odisha)

“I had to take loans from three different organizations, namely Spandan, SKS and HDFC. I received Rs. 16000/-, Rs. 10000/- and Rs. 15000/- respectively from those three organizations. I was unable to repay the borrowed sum from Spandan so was compelled to borrow from SKS to repay it. But then I failed to pay 2 instalments of SKS. This led to collecting agents verbally assaulting me. They sat in front of my house with an intention of intimidating me. I begged them to give me some time, but all my prayers fell in deaf ears. They took turns in stalking my house, at around 5.00 PM women employees from the nearest branch came to join them and then at around 11.00 PM they left, leaving the male employees still in front of my house. All this was happening while I was inside with my two children. When my husband came back home at around 1.00 AM, seeing multiple men in front of my home he in his drunken state raised question on my character and started physically assaulting me. Scared and desperate, finally I dialled 100 to seek help from police. Police came and asked the men to vacate the place but did not register any FIR against them, rather they told me to pay the loan immediately.

Other people from our area, who have borrowed from “Ashmita” (another organization) are facing similar or more problems. “Even in the case where one fails to pay one instalment, the recovery agents come and confiscate our cattle or any other movable assets that we have and sell them,” Seema Naik an adivasi lady from Saamegadia, Bhubaneswar recalls her tale of harassment. This has become a reality in most of the villages in Odisha.

Prabhati, another lady of Kakhadi panchayat under Tangi block of Cuttack district, took a loan of Rs.60000/- from an organization “Annapurna”. Government announced waiver of 3 instalments during COVID period. But now the organization is collecting all instalments including fine. Since Pravati could not repay the loan from MFI, her husband could not get agriculture loan.

Shanti, a lady from Bhandari Pokhari block of Bhadrak district explained that rules dictate a lady can take loans from maximum 3 organizations. But as MFI institutes set targets for their employees, the employees find different illegal ways to circumvent this rule. They even forge duplicate Adhar cards for different women, so that they can take more loans. Due to this malpractice, if any death occurs, the loanee is not entitled to any insurance claim.  Since such activities are illegal, sometime the lady borrower is threatened with legal action.

According to the experience of former Secretary of SHG Mahasangha of Remuna block in Balasore District, Haripriya Jena, while distributing the loans the MFI agents make the loanees take an oath that they will be collectively responsible for the repayment of the loans. And later if one member of SHG lags behind or is unable to repay, the agent forces other members of the  SHG to repay the loan on her behalf.

In Bhadrak town, a group named “Himmat” has taken responsibility to supply cereals to some Anganwadi schools.  To run this business, they have borrowed Rs.3,00,000/- from a Nationalized Bank. Odisha Government has declared interest free loans up to Rs.4,00,000/- for SHGs.  But the Banks are collecting both principal and interest. When asked the bank authorities reply, “If the loan is repaid completely, then the interest will also be returned”.

AIDWA Odisha state committee organized a state level workshop titled “Strengthening livelihood and freedom from loan” on 9th October, 2021 at Bhubaneswar. There were 72 participants  from the districts of Bhubaneswar, Baleswar, Cuttack, Bhadrak, Ganjam and Khurda. The experiences recorded above are of participants from different districts. The experiences of women from different areas are drastically opposed to the claims of the government. Inaugurating the workshop Comrade Mariam Dhawale (General Secretary, AIDWA) highlighted how the government instead of helping the people of the country during these times of COVID pandemic has pushed them into financial hardship and existential crisis. She also called upon everyone to be united and fight for justice.

Most important question is that if the State Government had promised to give loan up to Rs.4,00,000/- to self-help groups without any interest, then why are the women taking loans from MFIs at such a high rate of interest. The reason is that, taking loan from banks has become cumbersome, time-consuming and lots of documents are required.  So, arranging such documents and attending banks time and again is not viable on the part of women from rural areas. Furthermore previously every Tuesday was reserved in banks for SHG- related work. This facility that has now been revoked. This leads to longer waits for the loan process to be completed. In other hand, the MFI workers reach their home and prepare all documents for them if the “Aadhar card” is available.  Simply to get rid of the documentation problem, the women are taking loans at high interest and leading themselves into a financially disastrous situation. 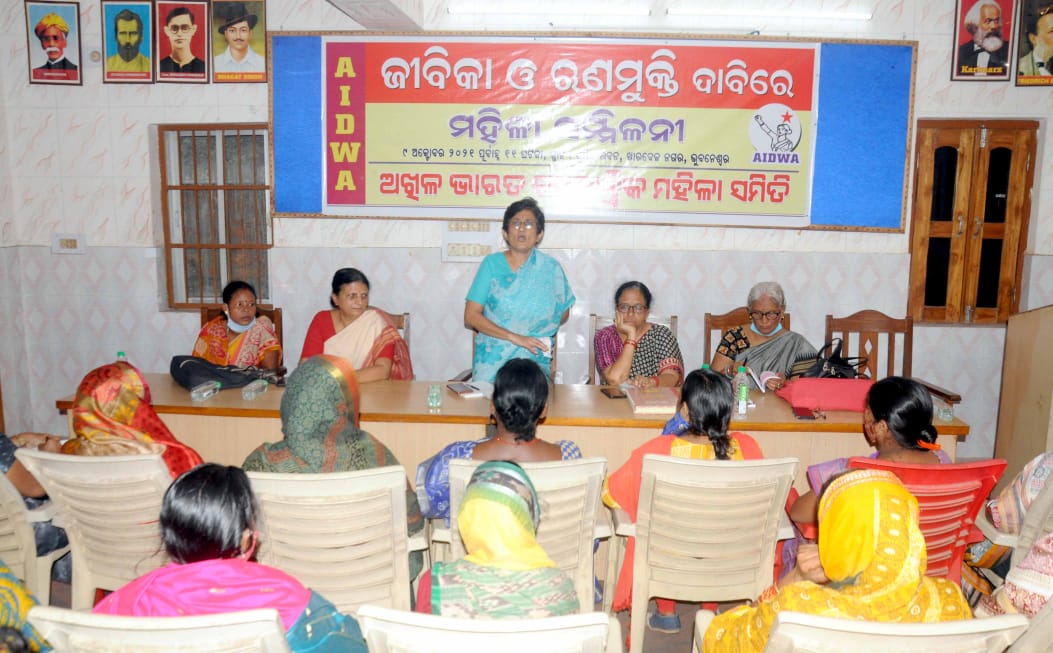 We discussed these issues with senior officials of a nationalized bank, who told us, “Because of infrastructure bottleneck and shortage of staff, the services to the SHGs are not given priority”. He observed that almost 98% of SHGs repay their loans in time. One of the zonal managers of a nationalized bank when approached stated that this year till date Rs.336 crore has been disbursed to 30000 SHGs in that particular zone and most of the loans are repaid smoothly.

So, we can draw the conclusion that if the process of granting loan can be made accessible to women, they will prefer taking loans from banks. They will be free from higher interest rates and all related pressure and humiliating situations. Instead of that the banks are providing loans to MFIs at a rate of 9-11.25% and then the MFI’s utilize this amount to give loans to women at a hiked rate between 60-100%. This is a massive violation of the guidelines set by Reserve Bank of India, stating that the difference between the interest rates of the loan taken and given by the MFIs cannot exceed 4%. Despite these gross malpractices the Government and RBI seem to be uninterested in any form of scrutiny on the MFIs.