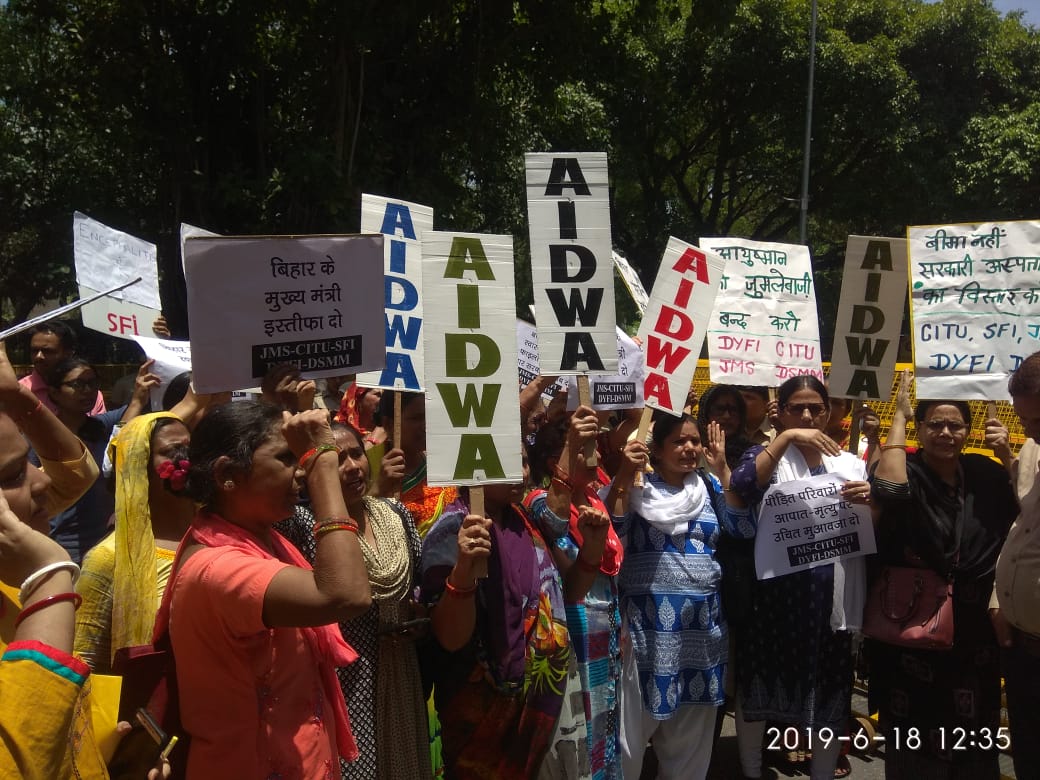 The Delhi state units of the All India Democratic Women’s Association, Centre of Indian Trade Union, Students’ Federation of India, Dalit Shoshit Mukti Manch and Democratic Youth Federation of India held a joint protest demonstration at Bihar Bhawan, New Delhi on June 18, 2019 against the total failure of the Nitesh Kumar state government in preventing the death of more than 107 children in Muzaffarpur. These are figures of the casualties in the hospitals. The number of children who have died in their homes is unaccounted. The widespread epidemic of the Acute Encephalitis Syndrome (AES) affecting children between 0 to 7 years has caused many fatalities.  The state's lackadaisical attitude at dealing with the cases of Encephalitis has cost the lives of more than 100 children in Bihar this year. The protesters condemned the apathy shown by the state health minister Mangal Pandey who said that the death of these children was ‘not a big issue’. The above organisations said that a health minister who thinks that the lives of poor people is not precious does not deserve to remain in that post and must resign.
The health facilities to tackle this epidemic are far from adequate. Large number of deaths are also due to malnutrition. This exposes the non-functioning of the Public Distribution System depriving the Below Poverty Line families of their right to cheap food grains.
A delegation consisting of AIDWA general secretary Mariam Dhawale, AIDWA state secretary Asha Sharma, CITU state secretariat member Aniyan,SFI state committee member Shruti, DSMM state presidentBrahmajeetand DYFI state secretary Sanjeev Kumar met the Officer on Special Duty, Mamata Ojha and submitted a memorandum demanding immediate provision of adequate medical facilities in Mazaffarpur; proper hygiene and cleanliness in hospitals and supply of food and nutrition to all the BPL families in Bihar, especially Muzaffarpur. The protestors also demanded that immediate compensatory funds be given to the affected families.The demonstration was addressed by Mariam Dhawale, Asha Sharma (AIDWA), Virendra Gaur CITU state president, Utkarsh SFI state committee member and Brahmajeet (DSMM).
It must be noted that every year AES takes several lives in Eastern UP and Northern Bihar, children being the majority of victims. Majority of the children who have lost their lives are children from rural BPL families. The government is refusing to accept malnutrition as the primary reason for children succumbing to this encephalitis and is shamelessly blaming the litchis and heatstroke for the deaths. Bihar is also the state with highest rate of malnutrition among children in the country. Improvement of the general living and health conditions of the people below poverty line should be the priority for the state.