No Teachers, No Classes in the Schools of a Country that Boasts of Becoming World Guru…

(Collated from UNESCO's 2021 Report on Education Today in India) 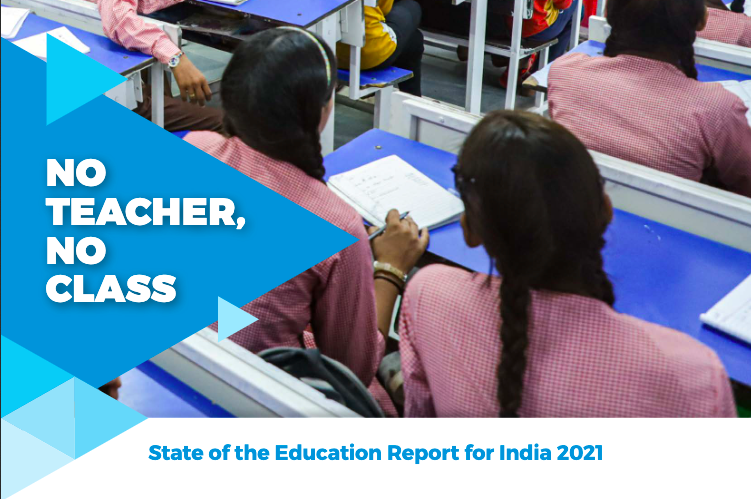 UNESCO's third report on the state of school education in India for 2021 was released recently, on 5 October, World Teacher's Day. The present status of school education in India became clear from the title of the report itself -"No teachers - no classes". The report, made under the guidance of the UNESCO office in New Delhi by an expert team of researchers from the Tata Institute of Social Sciences, Mumbai, thus throws light on the state of education in our country.

Despite the passage of the Right to Education Act, the picture given by UNESCO in this report is enough to indicate the terrible state of education. This report shows that even today there is a huge gap in the quality of rural and urban educational institutions in this country. Strongly critical of the education policy of the Modi government in 2020, this report finds it surprising that NEP 2020 was announced when all the educational institutions were closed due to the corona epidemic, and on top of that, its completion of one year was also celebrated this year.

The report also mentions that since primary education has no priority in the political agenda in this country, the country with the largest youth population in the world is still struggling with illiteracy and poor education. According to the recently published eighth India Skill Report in a country, where religion and religious identity are most important to the public and to the government, it is not surprising if more than 50 per cent of graduates are not employable.

If this UNESCO report is accepted by the Government of India as the basis for meeting its Sustainable Development Goal 2030, then the condition of education in the country might improve. But education is not on the agenda of this government. On the contrary, the present government’s agenda seems to be related to how educational institutions of international repute can be destroyed and, how the minds of students can be poisoned through distortion of history and propagation of retrogressive ideology. That is why there is no guarantee that this government will do anything to achieve the education-related target of the Sustainable Development Goal 2030.

According to a statement issued after the United Nations held a special meeting related to global education to assess the status of post Covid 19 education, the Covid epidemic has erased the achievements made in the field of education all over the world in the last 20 years. More than 100 million additional children around the world have been denied the minimum levels of reading and writing. The report also brings out the fact that, in the background of this global situation, it is not difficult to understand how few students in India have been able to pursue studies through the Internet during the times of Covid. According to the report, only 18 per cent had internet access in the rural parts of the country, but how many of them could actually use it, is also doubtful because many questions like having money to buy data packs, electricity to charge mobiles etc. are related to it. The report suggests that 42 per cent of urban areas have internet access, but how many students living in urban poor settlements were able to take advantage of it is also a question. Apart from this, the report also states that more than 62 per cent of the teachers at the higher secondary level in private schools are not fully qualified. Under such circumstances, even if teachers tried to work to the best of their ability, how successful they would be in this, only time will tell. The report has also given ten suggestions at the end through which quality education could be made available for all in the country. The most important in this is to increase the number of teachers in the schools in the north eastern and rural areas and to make arrangements for their proper training.

Overall, according to the report, arranging for adequate number of teachers in schools, opening more and more schools in the government sector so that poor and rural children do not remain deprived of education due to fees etc. and reducing teacher student ratio i.e. increasing the number of schools to improve the levels of education, can be some of the important steps towards achieving the Sustainable Development Goal 2030. However, the big question is, whether the government of our country is ready to do all this. In fact, all indications suggest that there is a deliberate plan among the powers that be to undermine public education at all levels. We have to gear up as an organisation to prevent this.