Organised Murder of Children at Gorakhpur 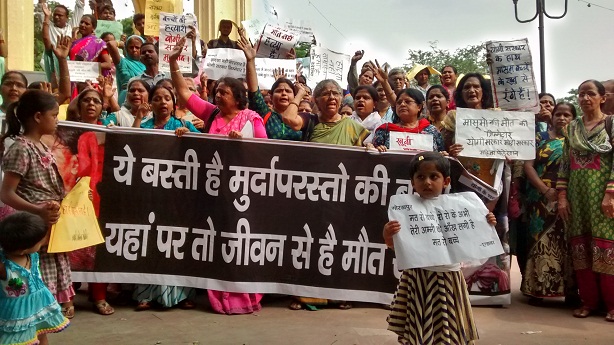 One Zahid Ali of village Bichhiya thus narrated the incident of his five year old daughter, Khushi. She ran high fever and was taken to a nearby doctor. Next day, the girl started vomiting and trembling. Then she was brought to the medical college hospital on the night of August 10. Zahid stated that the atmosphere at the ward was of utter confusion. Everybody was running here and there. The attending nurse gave him an AMBU bag – a device which supplies oxygen to patients temporarily. He saw every attendant giving oxygen to their patients with the help of AMBU bag, as the piped supply of oxygen had stopped in the ward. Zahid too tried his best to pump oxygen from AMBU bag to Khushi. However, his daughter could not be saved, and she died in the evening of August 11.

Similar is the story of Israwati of village Belwara. Her grandson was born on Rakshabandhan day. Her two granddaughters tied rakhi to their new born brother. The next day, the baby started crying, and ran high fever. He was taken first to a private clinic, and then to the medical college hospital. The family was also provided with AMBU bag there. On August 11, around 5 pm, the baby vomited blood, and his body became cold. Four-day old baby had expired. Israwati stated that a number of newly born babies also met the same fate in the ward.

Brahm Dev Yadav of Baga Gadhra, a farmer by profession, had similar experience. On August 1, his wife delivered twins – a boy and a girl. Everybody in the home was very happy. On August 3, the twins fell ill. They were taken to a local doctor. After two days, the doctor asked Brahm Dev to take the babies to the medical college hospital as their condition had deteriorated. Brahm Dev informed that the meter installed at the pipeline supplying oxygen in the hospital was showing the pressure as LOW during the days prior to August 10. He was also provided with AMBU bag during the night of August 10. He, along with his wife, kept on operating the device to supply oxygen to both of the kids. However, the baby boy expired on 11th noon. As he came back after disposing off the body of his son, his daughter also expired the same day. It was during less than 48 hours on August 10-11, that as many as 34 children and 19 adults died in the hospital because of non supply of oxygen.

Gorakhpur and nearby districts of Maharajganj, Kushinagar, Deoria, Basti, Azamgarh, Ballia have been prone to attack of encephalitis virus for decades. Ward no. 100 of the BRD Medical College Hospital, with 54 beds has been set up for treatment of encephalitis patients. Another ward having 44 beds is meant for new borns. The patients of these wards are supplied oxygen from liquid oxygen plant through a pipeline. One Pushpa Sale Agency, which supplies oxygen to this hospital, has not been paid for the last five months to the tune of Rs 65 lakhs. The firm had taken up the matter with the concerned authorities several times, and had made it clear that they could not go on supplying oxygen for indefinite period. But the authorities did not pay heed in the matter. The firm stopped supply of oxygen, resulting into loss of so many lives during less than 48 hours on August 10-11.

Yogi Adityanath, the chief minister, has been representing Gorakhpur Lok Sabha seat in parliament for the last almost two decades. But no concrete steps have been taken to get the Gorakhpur area rid of the deadly virus of encephalitis. He has made insensitive plea that the deaths were caused not because of shortage of oxygen! The health minister Siddharth Nath Singh made another such statement that 500 to 600 deaths occur during the month of August every year in and around Gorakhpur! Such statements from the government do not reflect their genuine concern.

A majority of victims of this deadly disease belong to poorer sections of society. There is wide spread malnutrition amongst them, and there is no provision of potable water for them. Their locations are unhygienic. A survey report estimates that 74 per cent of the victims of encephalitis come from families having monthly income of less than Rs 2000. About 50,000 deaths have taken place since 1978. Some 10,000 deaths have occurred in the Gorakhupur medical college alone.

CPI(M) Polit Bureau member, Subhashini Ali, along with members of state committee and Gorakhpur district committee visited families of some of the victims, and BRD hospital on August 17. It was observed that the infrastructure facilities at the hospital are very insufficient to cope with the situation there.  Three to four children were being accommodated on one bed. Employees and nurses are working on contract basis, that too without getting salary for months together. Even doctors are working on contract, who also get salary after four-five months. Adequate number of ventilators and warmers are not available. Funds are not made available on regular basis resulting into recurring crisis of one or the other kind.

In order to underline remedial measures to combat the menace of encephalitis, CPI(M) and AIDWA members held a demonstration in Gorakhpur on the 18th. The demonstration was led by Sudha Sundararaman, CPI(M) Central Committee member and national vice president of AIDWA. The procession reached DM office, passing through main thoroughfares of the city. Large number of people from Gorakhpur and adjoining areas participated in the demonstration. A memorandum addressed to the chief minister was submitted to the DM office, which included the following demands:-

-          There should be adequate stock of liquid oxygen in the hospital at any point of time.

-          Other life saving medicines and equipments should be available in sufficient quantity.

-          Procurement process of oxygen, medicines and necessary equipments be made transparent.

-          Adequate number of qualified doctors, nurses and other staff should be posted at the hospital on permanent basis.

-          PHCs and CHCs should be equipped with sufficient number of qualified staff, medicines and equipments, so that patients are treated well there itself.

-          Provision of potable water should be ensured in the surrounding towns and villages. Cleanliness should also be ensured.

-          Penal action should be initiated against the erring officials of administration and hospital authorities who are found to be responsible for tragic death of children due to non availability of oxygen.

-          Health and medical education ministers should tender resignations owning responsibility for the tragic deaths of children.

The issue of health should not be reduced to provision of medical facilities alone. It is directly related to the well- being of common people. Socio-economic upliftment is the real remedy of such tragedies. Hence, socio economic well being of masses should be brought on political agenda of governments of the day.