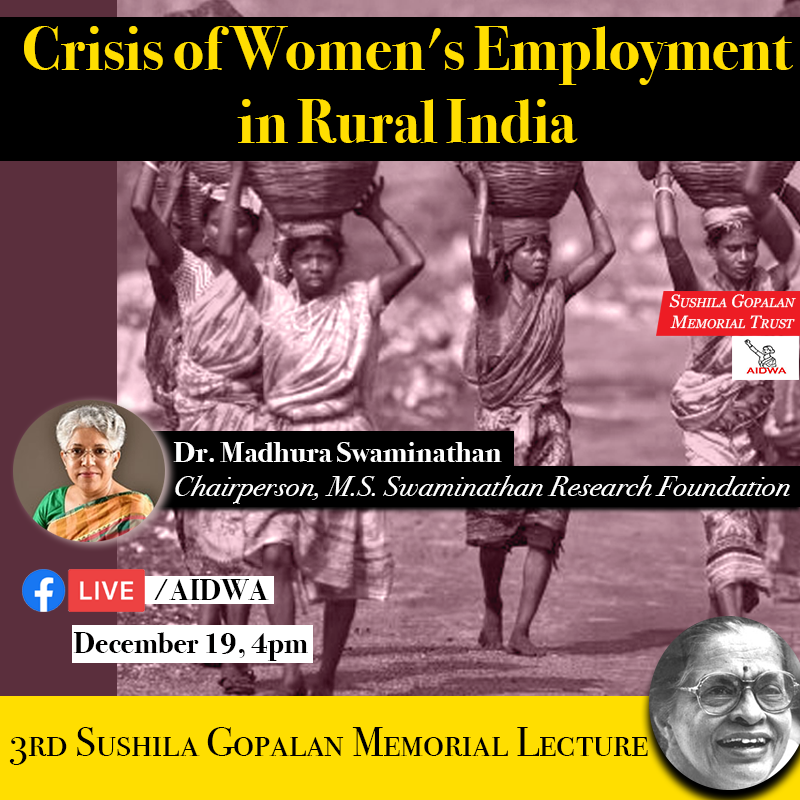 On this 19th of December, we fondly remember Susheela Gopalan, a great Communist revolutionary and an unabashed partisan for women’s rights.
She was born in a well to do family in the village of Inchamudi, in Thrissur district of Kerala. She was deeply influenced by the freedom struggle and anti-imperialist values that continued to determine her work throughout her life. As a bare teenager, she addressed a meeting of coir workers who were mobilizing for a historic strike action. Later, through the struggles and leadership of the coir workers, she gained deep insights into the interlinked exploitation of class and gender. She became a member of the Communist Party at the age of 18, and as a young college student, faced the wrath of the authorities for her political work, for which she was jailed several times during her life.
This background informed her work as the founding General Secretary of the All India Democratic Women’s Association that was formed in 1981. She was elected as a Member of Parliament thrice and a Member of the Kerala State Assembly twice, and used these forums in an extremely effective way to advance important reforms in laws concerning women. As a Minister, she took several important policy decisions that brought relief to women, particularly those working in the unorganized sector.
Believing strongly in united struggles, she played an extremely active role in bringing together national women’s organizations on a common set of demands on a wide range of issues that helped their struggles to become dynamic and visible.
She made a special effort to encourage and develop activists, strongly believing in the necessity of bringing all sections of women into the movement and its leadership. Her personal concern and care enabled them to develop as political activists.  She strongly believed in the need for them to assert their ideas and beliefs in all spheres, including within the family.
At the time of her death, she was a Patron of the All India Democratic Women’s Association (AIDWA), a Vice President of the Centre of Indian Trade Unions (CITU) and a member of the Central Committee of the CPI(M).
Susheela Gopalan is no more, but she lives on in the dreams and aspirations and the struggles of all women, and of all the oppressed people striving for the goal of emancipation, for which she dedicated her life.
LONG LIVE SUSHEELA GOPALAN!