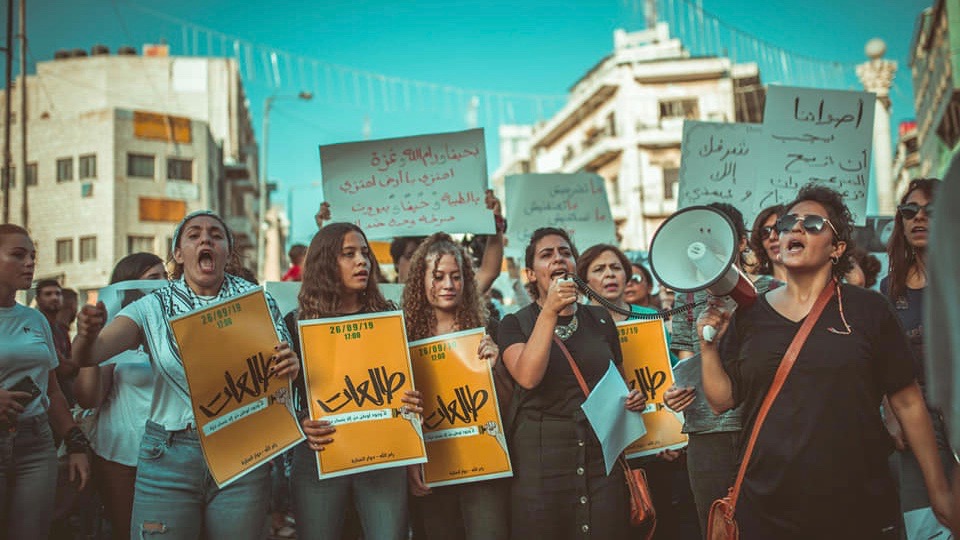 Thousands of Tal3at activists mobilized across Palestine against violence against women in September 2019. Photo: Sharif Mosa

Starting from May 10, Israel bombed Gaza for 11 days. At least 256 Palestinians were killed including 66 children and 40 women. Homes, schools, hospitals were destroyed, all amidst a raging pandemic which had already devastated the region. These Israeli hostilities, along with the ones carried out over the past seven decades, backed by the US of course, have done little to hamper the Palestinian dream of freedom from occupation. They have even strengthened the political will of the people of Palestine. There are also women in these struggles who have categorically stated that no freedom is possible without the freedom of women. The everyday violence women face living in a patriarchal society is aggravated by the violence of the colonial occupation. In all their movements for social, political and economic emancipation-- be it against domestic violence and femicides or for political rights-- the common demand for freedom from Israeli occupation is a joint refrain.

Talking about everyday life for Palestinian women as they navigate both Israeli apartheid and gender-based oppression, Abeer Abu Khader from the Union of Palestinian Women's Committees (UPCW) told me in an interview, “Palestinian women face social burdens imposed by the occupation on their daily life, such as the apartheid wall, military gates, house demolitions, and daily arrests. This along with sexual harassment of women, especially female students who go to universities daily, by Zionist fanatics has increased their social oppression and the monitoring they face by society. In addition, women bear the burdens of natural and social differences in a way that often exceeds what other oppressed and poor sections bear. Women often bear the burdens and consequences of the current situation more than men, especially as women bear the huge responsibility of managing the internal affairs of the family in the current crisis.”

Gender based violence is no less a problem in Palestinian society than in all capitalist and patriarchal societies. However, during military operations such as the recent one, the risks of experiencing gender-based violence increase.

For instance, during Operation Protective Edge in 2014, the International Institute for Environment and Development found that there was a 22% increase in the forms of domestic violence experienced by married women, and 30% for non-married women. After ceasefire was declared in the recent Gaza offensive, the UNOCHA found in their Situation Report, “At the height of the escalation, 113,000 displaced people sought shelter and protection at UNRWA schools and hosting communities.” The displacement and insecurity caused by such offensives also leads to increasing instances of domestic violence.

It is hard to imagine how these violent disruptions impact the lives of children. While on the one hand it results in the idea of a free Palestine being a part of their imagination from early on, it also means there is no possibility of any normalcy in their childhoods. UNOCHA estimated that education of nearly 600,000 children was disrupted as Israel bombed Gaza this time and destroyed their schools and homes. Their mental health is also impacted. Of the 66 children who died, 11 were participating in a program helping them to cope with trauma caused by the constant violence of the occupation they live under.

It needs to be remembered that these hostilities came amid a raging pandemic which had already stretched Gaza’s resources and infrastructure, particularly the health system. Nine hospitals and 19 primary healthcare centres along with water and sanitation facilities were damaged. Doctors and medical staff were among the casualties of Israel’s attacks. “The direct targeting of health facilities, the failure of ambulance teams to reach the wounded to evacuate them to hospitals, the destruction of roads leading to hospitals, has increased the burden on women, as they are responsible for securing the daily life of their families in the light of the collapse of the economy and the fragmentation of families,” Abeer explained.

The analysis of this situation has led women’s movements and organizations in Palestine to proclaim that women’s struggles and the broader struggle for political liberation are interconnected, one cannot happen without the other.

At the same time, Palestinian women have also expressed anger over their struggles being sidelined by the larger movements against Israeli apartheid and occupation. Tal3at (meaning ‘step out’ in Arabic) is an important women’s collective which was formed in Palestine in 2019 as a wave of anger erupted when 21 year old Palestinian woman Israa Ghrayeb was killed by her family members. Israa was among 34 Palestinian women killed that year according to data collected by Tal3at. The massive demonstrations that were held in response across Palestine and parts of Lebanon raised the slogan, “There is no free homeland, without women’s freedom.”

As Abeer explained, the UPCW actively works with women and children, to empower them, for their rights, as well as to propagate the ideas of the Palestine liberation struggle.  “The Union aims to improve the status of Palestinian women and empower them to ensure real equality between women and men and social justice for all segments of society. The Union is also an integral part of the Palestinian national movement that struggles to get rid of the Zionist occupation. It struggles along with all progressive, Arab and international movements against the aggressiveness of globalization and against all forms of discrimination and injustice against any social group in the world, especially women.

The Union works annually with approximately 30,000 women in the West Bank and Gaza Strip, through many programs and activities based on the needs of women. The Union gives special priority to working with poor women living in remote and marginalized villages, in addition to providing programs especially for women in refugee camps, such as economic support, legal and psychological advice, as well as a basic program of awareness and empowerment. The Union also works with urban women by encouraging them to engage in social life. Cities in Palestine are better than villages and camps in terms of services but still suffer from traditions and customs that constrain women and limit their access to their rights. …

The Union also works to target groups of children in order to raise them on the concepts of freedom and democracy, equality and justice through courses and summer camps.”

Even after the ceasefire was announced on May 21, Israeli hostilities have continued. The new government of Naftali Bennet has already violated the ceasefire twice, bombing Gaza again. Attempts to forcibly evict Palestinians, attacks on protestors and other intimidation techniques are still going on. However, with the youth still bravely resisting, and the next generations being raised with the ideas of freedom and liberation, the Palestinian dream is alive and strong.